Are These Charts Showing Global Trade Collapse The Signs Of Near Economic Calamity?

Is this some seasonal thing-although the  various charts being at historic lows seems to belie it-or is this the start of some major economic collapse. One thing is for sure the charts can't continue on in this fashion without serious economic ramifications.


Qualifications as I see them;1. Note the uptick in the Baltic Dry Index (which may be seasonal) 2. The USA East Coast has had an unseasonably warm winter which may have affected oil usage.

From: Mish's Global Economic Trends AT THIS LINK

On February 6, I noted (with huge thanks to reader Tim Wallace) aHuge Plunge In Petroleum and Gasoline Usage.

Tim used weekly numbers, which show, much week-to-week volatility. Instead, I proposed using rolling three-month averages, compared to the same three months in prior years. 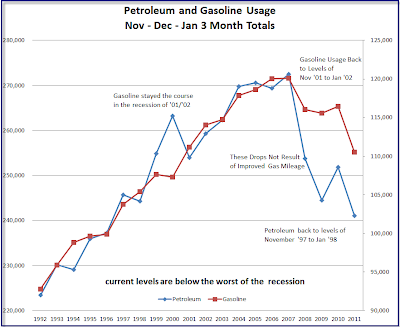 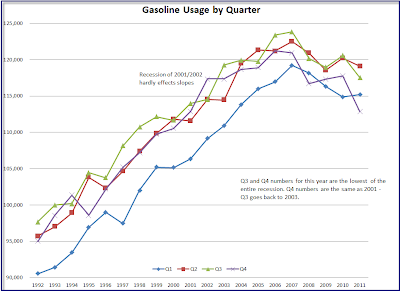 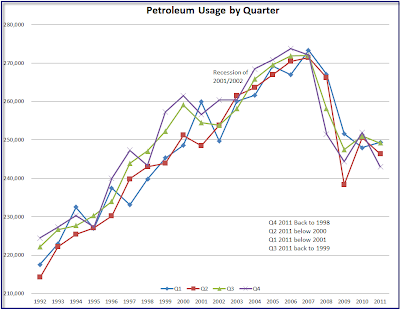 Wallace writes "Gasoline and petroleum demand recently has plunged more than at any time in the recession. When you see petroleum usage back to numbers in the 1990's, you know there is serious economic trouble no matter what the talking heads say."

Wallace willing, each month I will post the "Petroleum Rolling Three-Month Average Index". Hopefully we can get a derivative of that first chart, "Percent Change From a Year Ago".

At the end of February the comparison will be December - January - February vs. the same three months in prior years.
Negative Shipping Rents

Amazingly, shipping rates have dropped so low, shippers will pay you to ship, just to get the cargo vessels to better locations.

Glencore International Plc paid nothing to hire a dry-bulk ship with the vessel’s operator paying $2,000 a day of the trader’s fuel costs after freight rates plunged to all-time lows.

The vessel will haul a cargo of grains to Europe, putting the carrier in a better position for its next shipment, he said.

“Our other option was to stay in the Pacific and earn poor revenues or ballast to the Atlantic and pay the fuel ourselves,” Rodley said. Ballasting refers to sailing without a cargo. Charles Watenphul, a spokesman for Glencore, declined to comment in an e-mailed response to questions.

D/S Norden A/S, Europe’s biggest publicly trading commodity shipping company, said Feb. 3 it hired a Supramax vessel at no cost other than fuel charges, its first such transaction in a quarter century. 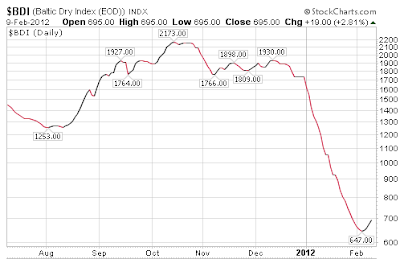 The Baltic Dry shipping index (a measure of shipping costs) was down 32 days in a row before turning up on Tuesday.

The Harper-Peterson Shipping Index is also in dismal shape. 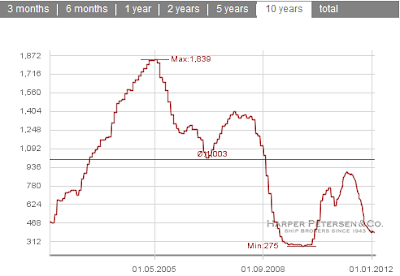 Many ships came online in the last couple years but a plunge this deep cannot be blamed entirely on new ships added.

Rather, the huge dropoff in gasoline and petroleum usage in the US, coupled with falling shipping rates, a drop in Japanese Exports Three Consecutive Months, and a European Recession poised to get much worse, makes a strong case that a collapse in global trade is underway.

Fair use notice:This website contains copyrighted material, the use of which may or may not have been specifically authorized by the copyright owner. Excerpts of such material is made available for educational purposes, and as such this constitutes 'fair use' of any such copyrighted material as provided for in section 107 of the US Copyright Act. In accordance with Title 17 U.S.C. Section 107, the material on this website is distributed without profit to those who have expressed a prior interest in receiving the included information for research and educational purposes. Original material published on this website may be excerpted and the excerpt reproduced for the purpose of critical reviews. However, such original material may not be reproduced in full on another website or in any manner without prior approval from this website's owner. In all cases when material from this website is reproduced in full or in part, the author and website must be credited by name and a hyperlink provided to this website.
Posted by M. Joseph Sheppard at 9:40:00 PM