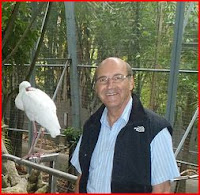 This tweet from a righteously angry now former HBO subscriber;


Also, Big Hollywood makes this interesting point :
AT THIS LINK 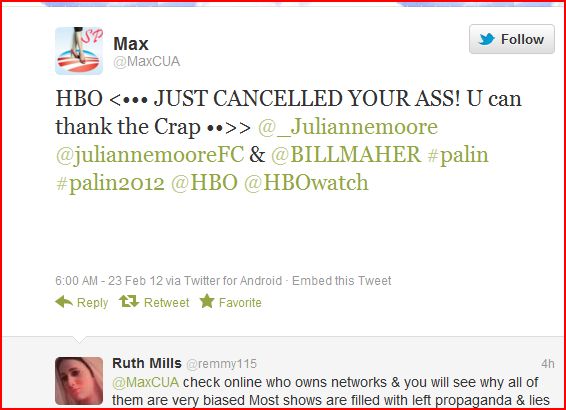 As I suggested previously, the one thing these leftist Hollywood types understand is losing money. Let's hope enough people cancel so they get the message.


I suggested a boycott of HBO would be the most effective answer to the hit job, along with total silence about the film when it comes out. They love controversy as it brings in eyeballs, and if the expected backlash from Palin supporters doesn't happen, and the film gets panned, it will be a disaster for the financial backers. They clearly gambled on Palin running, and this film being a nail in her campaigns coffin, but they gambled wrong.


If thousands of Palin supporters, and even some fair minded folks fed up with the disgusting state of the political world, cancel, and-as the people cancelling have done, advise HBO why they are cancelling, it just might, make a difference going forwards.


In the meantime this sort of thing, one example from a number, has to hurt-and a good thing too. If done in the tens of thousands...ouch.

UPDATE; Mark Whittington at Yahoo Voices makes similar points in his attack in HBO/Hollywood liberals AT THIS LINK


The only possible good that might eventuate from the latest leftist Palin hit piece, the HBO "blockbuster" Game Change, is that it shows, once again, and seemingly ad infinitum, the never ending attacks on Palin by the liberal element in society.


The other possible gain would be that if enough folks boycott it, and it is a financial flop the attacks might stop. A faint hope I know, but one thing they do understand is money and if the Palin attacks hit them in the back pocket that might shut them up for a while.


The shows producers obviously counted on Palin being a candidate, and assumed that this tell all fantasy would be a nail in her campaigns coffin. How they must have cursed when she announced she was not running-along with the execrable Joe McGinniss and the entire tribe of Palin haters/bloggers/talk show hosts.


That the producers have stated that the show would not be a hit piece was so transparent that even ABC have commented that reviewers don't see it that way. It is, like the book that preceded it, simply an attempt to make money whilst attacking a conservative woman.


The left is in a bit of a bind as they have now taken to shouting "she's irrelevant". They can't have it both ways (or actually with leftist hypocrisy they can try). Either this is an "impartial" movie presenting facts about a key figure in American political life who is thus totally relevant, or she is a nobody whose 15 minutes of fame are up-go figure.


The best thing that can be done is for conservatives to not swallow the bait (following Palin's lead as below) and attack the movie and the actors. If it ignored, and quietly boycotted, the lack of publicity, and hopefully comments from fair minded people about the bias, will doom it to financial destruction and hopefully take down the originators with it.


HBO’s critics on the Right were apparently right about the network’s upcoming movie “Game Change,” about Sen. John McCain’s run for the presidency in 2008.
While the network claimed the movie would be even-handed politically, it seems Sarah Palin doesn’t come off too well in the trailer.
Critics decried the HBO film from the get-go as a hit piece on the former Alaska governor who became the target of a merciless media and political barrage after McCain chose her as his running mate.
There’s been no comment yet from Palin about the trailer for “Game Change.”