Newt Gingrich, on Romney’s chickening out:
“Our expectation is we will participate in all the debates. The Romney model is go to Wall Street and raise huge amounts of money to run negative ads, and you can understand why having to defend that strategy is probably not something he’s very happy about.”
Gingrich said, “All I can tell you is that the average Georgian and the average Ohioan is going to say, ‘Wait a minute, they’re not willing to come here to debate but they want my vote?’”


It is not the FIRST time that Romney chickens out of a debate.


“Last December, Human Events and Red State moved quickly to lock down a date for a Lincoln-Douglas-style debate between Mitt Romney and Newt Gingrich.
The two organizations went so far this past Monday as to firm up the Annenberg Theater at the Newseum in Washington as the venue on Dec. 19 after another debate originally scheduled that day was canceled.


For its part, the Newseum was excited to host the pre-primary forum.


There was just one problem. While Gingrich was ready to take his place on the stage, the Romney campaign politely declined in a series of mostly e-mail exchanges.
As Joe Guerriero, publisher of Human Events and Red State, put it to RCP: “Newt was all over it, and the Romney camp basically said no.”
http://recovering-liberal.blogspot.com/2011/12/romney-chickens-out-of-mano-mano-debate.html 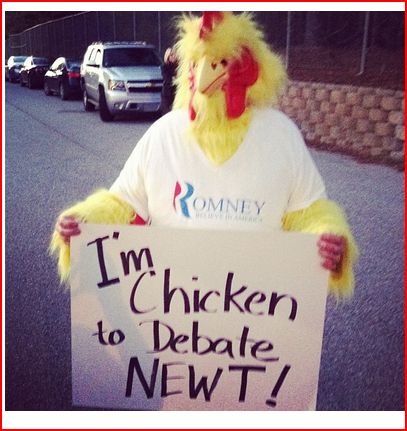 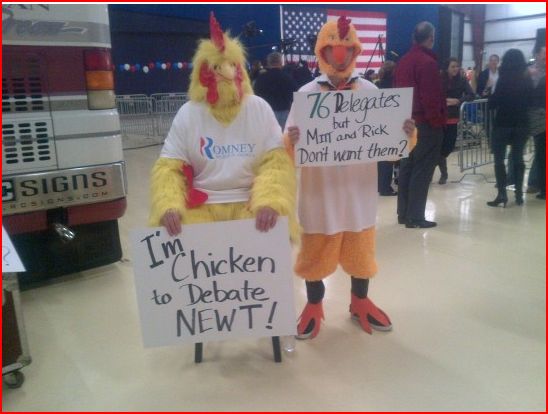 From;Free Republic which linked to my previous article.
Posted by M. Joseph Sheppard at 12:35:00 AM