Palin Getting Major Poll Revival; Clobbers Christie By 16 Points in 79,000+ Vote Poll.28 Points Ahead Of Bush 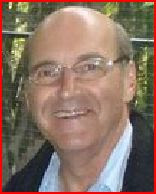 UPDATE: Fox took the poll down but not before the massive voting result had Palin the clear winner-reported as;

Whether it is because of Sarah Palin's increased public profile following on from her two day, six program blitz of the airways during her visit to Fox studio's last week or her CPAC speech which received standing ovations and positive reviews even from the liberal media, Palin seems to be on a roll poll wise.


Quite possibly this lift in on line polling might be due to voters being unhappy with their choice of prospective nominees-thus all the talk of a late entrant to the fray or a brokered convention. Talk that Palin did nothing to damp down when she advised that she would be "willing to help in any way' should the convention be deadlocked.


Whenever this newspaper runs articles about Palin the comments section is filled with usual hate remarks and pure idiocy one sees in leftist sites whenever Palin is mentioned. The article the poll runs alongside being no exception of course.


But, astonishingly, the majority of voters would vote for Palin for president in this liberal bastion currently by a 53%-45% margin. 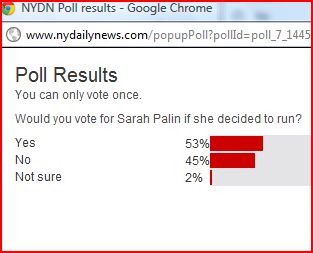 This is of course an on-line poll and although it advises that readers can only vote once these sort of polls have to be taken with a grain of salt. However, even given all cautions, the fact that in a NYC poll Palin can get above 50% is remarkable.


Today Fox News AT THIS LINK ran a poll asking viewers if they would choose Palin or Christie in  the event of a deadlocked convention and, with over 12,000 (now 27,500) votes in so far Palin is far ahead of not only Christie but the other prospective candidates, particularly Jeb Bush whom the GOP establishment have touted as the "White Knight" should Romney falter.

The reality is, as I wrote yesterday, of all prospective late entry candidates, only Palin has the name recognition, resources and foot soldiers to potentially win the subsequent general election-it looks like the voters see it that way as well.. 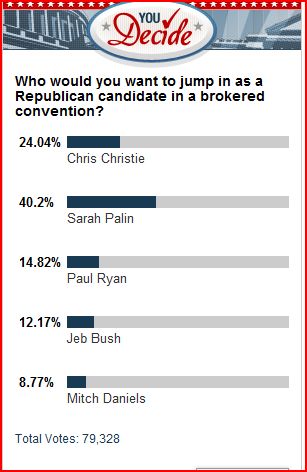