Instead of saying "I'm not quite sure what she'd (Governor Palin) be referring too" when asked about Palin's remarks that she wasn't convinced Romney was fully a conservative  and adding, in what sounds too cute, snide, silly and contradictory all at at the same time, "I don't know where to find her she is on your show all the time" Governor Romney might have used more diplomatic language.


He might have said, "I look forward to the opportunity of meeting with Governor Palin, any time any place and discussing her concerns which I am confident I can allay" or some such diplomatic language. Instead he appears to have used terminology which offends, or at the very least confuses the supporters of the darling of CPAC-a fatal error?


Doug Brady of Conservatives4Palin discusses just why Governor Romney might have given Governor palin the idea that he is not fully a conservative in his post below.


Mitt Romney: Why Does Governor Palin Doubt I’m a Conservative?

The other day on Fox News Sunday, Governor Palin questioned Mitt Romney’s conservative bonafides, indicating that she’s “not convinced” that the latest version of Multiple Choice Mitt is any more grounded in conservatism than the version which gave us RomneyCare, for example.  This morning on Fox and Friends, the Mittster expressed incredulity that the Governor (or anyone else) would dare question his conservatism:

“Well we should probably spend some time with Sarah Palin, although she is hard to find. She’s on your show all the time,” Romney said.
“I’m not quite sure what she’d be referring to. I’m pro-life, pro-traditional marriage. I believe in the second amendment. As governor, I balanced the budget every year I was in office. Put in place a $2 million rainy-day fund. Cut taxes 19 times,” he also said.

Maybe I can be of assistance to His Mittness.  This is just a guess, of course, but could it be that real conservatives, such as Governor Palin, are having difficulty overlooking Mitt’s recent positions on, oh, I don’t know, such issues as  cap and trade, ethanol subsidies, government health care mandates, the appointment of liberal judges, man-made global warming, andminimum wage indexation, to name a few?  Further, let’s take a look at a few of the claims Romney made in the short quote above:
On Romney’s budget and tax cutting claims:

Overall spending during Romney’s tenure increased 20.7% (from $22.848 billion to $27.588 billion).
By comparison, a fellow Veepstakes candidate, Tim Pawlenty, increased spending in Minnesota by 17.2% (from $13.6 billion to $15.947 billion) from FY 2004-07 (more on Pawlenty next week).
Government employment in Massachusetts also grew 7.2% (from 62,012 state employees to 66,483) during Romney’s tenure. Someone had to manage the massive new healthcare bureaucracy.
Taxes: Romney’s tax record is mixed. Politicians rarely claim they raise taxes, but they like to distinguish between fees and outright tax hikes. Romney raised taxes or fees seven times in Mass, but only cut taxes three times.
Overall, during Romney’s four years in office, taxes increased $175 million. This total is nothing compared to some tax-hikers like Jon Corzine (D-NJ), but Romney doesn’t have a great record as a tax-cutter.

On being pro-life:
On the Second Amendment:
And it only took me about 5 minutes on Google to unearth this. Imagine if I’d had a couple hours.  I also rediscovered this gem in which the Mittster clearly states his political philosophy:
And Romney wonders why people doubt his sudden, convenient claim to be a conservative? Or maybe I’m all wrong about the Mittster. Maybe he really is a conservative. After all, when he said “I’m someone who’s moderate and my views are progressive”, he was just a young impetuous lad of 55. And let’s not forget that he said the word “conservative” (or a derivation thereof) in his CPAC speech 25 times in 26 minutes. What could be more conservative than that? I’m convinced!
Click the image below to watch Romney react to Governor Palin’s doubts: 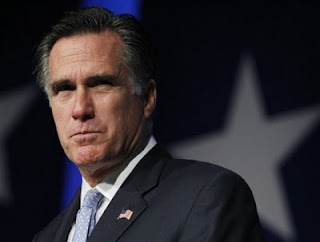 Romney’s latest evidence he’s a conservative: “If you’ve been in the business world, you can’t help but be conservative”.  Great. I guess we can expect stemwinding speeches by George Soros and Warren Buffet at next year’s CPAC.
Exit question: When Mitt told the folks at Fox and Friends that Governor Palin “is hard to find”, what’s he talking about?  Especially in light of his next line: “She’s on your show all the time”.  I’m confused.
Posted by M. Joseph Sheppard at 10:36:00 AM