Gleeful Reaction To Fischer's Win From The Palinosphere. Crickets From the Sullen Left

Why is this man smiling?


Mike Flynn: Palin endorsement ‘made all the difference’ in Fischer win

Mike Flynn, former government affairs director for the Reason Foundation and now a Breitbart.com contributor,writes that Gov. Palin's late endorsement of state Senator Deb Fischer in Nebraska's GOP primary for the U.S. Senate "shook up the race" and "made all the difference" in Fiuscher's stunning upset victory Tuesday:


I follow politics very closely, yet I hadn't heard of the Fischer candidacy until Palin's endorsement. National tea party groups like FreedomWorks had put all their resources behind Stenburg, with nary a thought about Fischer. A good reminder that these groups aren't as plugged into the grassroots as they like to claim.

Flynn says voters are rejecting politics as usual and rewarding bold, fearless candidates who stand on principle. Sarah Palin gets that, Flynn observes, while hoping that someday the national GOP will get it also.

Mike Flynn  At Breitbart .Read the entire post AT THIS LINK

"Just two weeks ago, the battle for the GOP nomination for the U.S. Senate seat in Nebraska was between state Attorney General Jim Bruning and state Treasurer Don Stenburg. Neither inspired the growing base of conservative voters. They were, to be charitable, standard conservative-ish career politicians. Mama Grizzly Sarah Palin shook up the race with a late endorsement of state Senator Debby Fischer. It made all the difference" 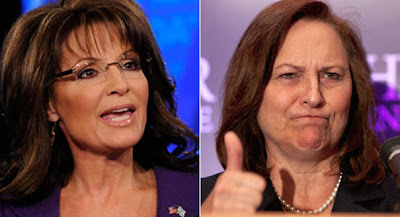 For those of you who thought ( or hoped) that Sarah Palin was history, well, like I told you, you have another think coming.