Here is Sarah Palin's newly released robo call for the candidate she has endorsed, Ted Cruz, for GOP senator from Texas for the May 29th primary campaign. Followed by the striking new poll after Palin's endorsement of him which puts Cruz within single digits of the lead after commencing his race at only 3% support.


And here is the  latest polling as reported by The Texas Tribune AT THIS LINK from their UT/TT Poll published May 21st.Ted Cruz is now within single digits of Lt. Gov. David Dewhurst who for so long, until the endorsement by Palin, was the presumed winner and poll leader. Eve if Cruz does not catch up within the remaining days till the poll he stands a great chance of coming out on top in the run off 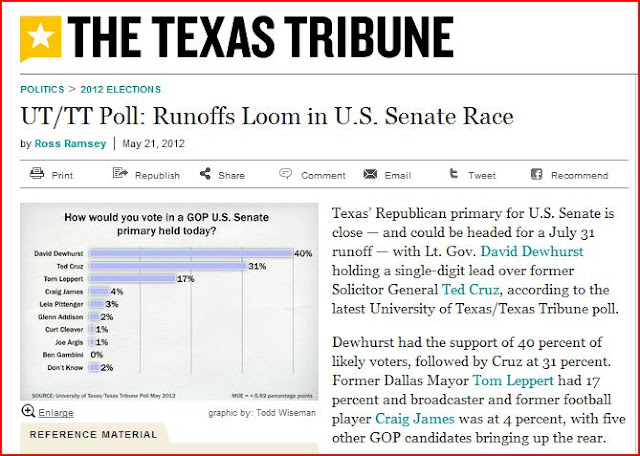 The Cruz rise follows on from palin's remarkable success in assisting conservative candidates, who were outsiders and initially polling lowly, into becoming winners. Richard Mourdock in Indiana and Deb Fischer in Nebraska are the two latest whom even palin's enemies have grudgingly admitted were assisted into the winners circle. if Cruz is the last in the recent trifecta then his win will be perhaps the most remarkable of palin's picks and her place as king maker will have to be accepted by the punditry.