"Sarah Who" Indeed Lib's
Deb Fischer with a 5% lead with 80% of the vote in-that's good enough to go. NOW CONFIRMED

After Sarah Palin declined to run for the GOP nomination the left sarcastically asked "Sarah who" almost inevitably whenever they thought they were kicking her political corpse.


That was usually followed by "why does anyone write about Palin-she's irrelevant." Well the left and the media (one and the same of course) has the answer to "Sarah who" after two candidates for the senate, Mourdock (by 20 points) in Indiana, and Fischer in Nebraska, asked for her support and won striking, come from behind victories, in their respective primary campaigns.


That candidates for such major office would ask an "irrelevant" person for her support would seem strange based on the Lefts meme but intelligent people, not blinded by wishful thinking and elitist snobbism knew better.


With these two wins, and the possibility of three in a row when the votes are counted for her endorsed choice Cruz in Texas, Palin has shown she is hugely powerful and influential. She is building up a large body of senior elected officials, starting with Georgia Senator Saxby Chambliss commencing in 2008.


Then her subsequent 62% success rate from the 2010 election campaign, who owe their election in some or most part to her,Gov.Hayley for example, which should hold her in good stead for the 2016 presidential campaign which will commence at the end of this November.


If the Romney forces do not acknowledge Palin's power and authority with a substantial speaking role in Tampa, they will be sowing the seeds of their own destruction if the Palin supporters feel insulted and alienated.Palin has been proven right, yet again, with her statement that she doesn't need a title to effect change but not having a title should not mean she should be ignored by the GP establishment.


The astonishing political influence and power of Palin can be seen by a review of the events of the Fischer race within  just a week after she made her endorsement culminating in Fischer's victory.


This latest WEAskAmerica poll is astonishing


Nebraska senate candidate Deb Fischer has gone from a 16 point deficit in second place to a 5 point lead. This whilst pollsters advise she still suffers from a degree of name recognition.


This massive turnaround in one week comes directly after Fischer was endorsed by Sarah Palin, who is also doing a robocall for her. Palin's endorsement was subsequently followed by other high profile local politicians.


If Fischer wins, following on from the win of Palin endorsed Mourdock in Indiana last week, who could but agree with Palin that she doesn't need a title to make a difference? 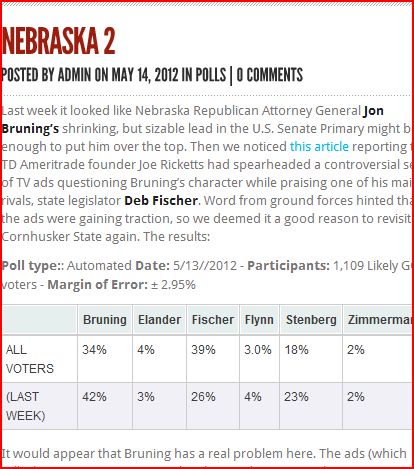 Then this pre-election analysis

"It's another example of Palin power. Since her endorsement, Fischer has received the endorsements from one of three sitting Nebraska congressmen, the founder of TD Ameritrade (along with $200,000 in media buys), and now Herman Cain. They are simply following her lead, and should be applauded for it.

Rep. Jeff Fortenberry on Thursday endorsed Republican Senate candidate Deb Fischer, adding to her apparent surge heading into the final days of the GOP primary campaign.
Fortenberry's support followed on the heels of a high-profile endorsement of Fischer from 2008 vice presidential nominee Sarah Palin.
Fischer's apparent momentum caught the eye of the Washington Post, which published a story questioning whether there might be "a Mama Grizzly upset in Nebraska" brewing.
Fischer, the Valentine state senator, has been transformed in recent days into Attorney General Jon Bruning's "biggest obstacle" in the May 15 primary election, the newspaper stated"

Sarah Palin and her husband, Todd, have endorsed Deb Fischer, providing the state Senator’s struggling bid to succeed retiring Sen. Ben Nelson (D) an adrenaline shot six days before the GOP primary.
Fischer sought the former Alaska governor’s support early in her campaign in “a note,” according to the Fischer campaign press release. Often in the 2010 cycle, candidates were surprised to receive a Palin endorsement. The Palin endorsement proved to be an effective tool for obscure candidates to gain footing in competitive primaries.
“I am writing to you as both a fan of your strong, conservative principles and as a fellow female Republican,” Fischer wrote to Palin. “I have watched your career with respect as you take on tough issues, all while raising a family and serving your great state. Your career has inspired me and so many other female politicians who believe principles should be above politics.”
The Palins wrote back six days before the primary.
“We are happy to support you and have asked SarahPAC to send a financial contribution to your campaign,” they wrote. “Good luck next Tuesday — the Palins are in your corner.”
The endorsement is an enormous boost to what had previously been an also-ran campaign. Fischer has struggled mightily for both attention and campaign funds in a field of three. Her GOP opponents include state Attorney General Jon Bruning, widely considered the frontrunner, and state Treasurer Don Stenberg, who has benefited from the support of the likes of the Club for Growth and Sen. Jim DeMint (R-S.C.).
Posted by M. Joseph Sheppard at 8:15:00 PM