Failed "Republican" politician and tame representative of the right on ultra-liberal MSNBC http://www.politico.com/reporters/JoeScarborough.html
gives his genius switch on recommendations for the G.O.P.'s presidential candidate selection for 2012.

"As the liberal president is checked by the conservative Congress, a new presidential race approaches, the voting base expands and the keys to the car get turned over to more unifying figures. This explains how a party could move from Gingrich in 1995 to Bob Dole as its nominee in 1996."

Yes-brilliant.Let's nominate a Bob Dole type candidate and get this outstanding result. A 379 to 159 electoral college disaster,31 states to 19 shellacking and a loss by an embarrasing 8.5%.Yes-that is exactly the "move away from the right" that we need Joe. 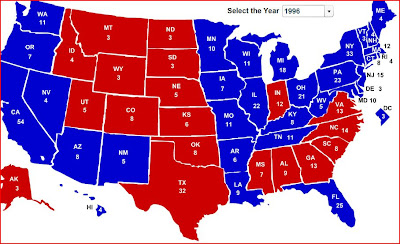 Writing in the left-wing blog Politico Scarborough and his cohorts grudgingly concede that Palin had nothing to do with the Arizona horrors but by defending herself against,he admits,unfair left wing attacks (especially from MSNBC by the way) she has seemingly disqualified herself from running for president (as has Romney for not speaking out !!). No, the answer is more of Bob Dole. Genius indeed.
Posted by M. Joseph Sheppard at 12:14:00 PM