Wednesday From Obama "Let Us Have Empathy".Thursday From The Leftist Media "Let Us Continue To Destroy Palin"

I said previously that President Obama is, metaphorically speaking) the attractive head (of a political party) on a rotten body (of supporters-one has to dot the i's and cross the t's in this mad liberal world).

And further opined that in the end it is the rabid fanaticism of the "progressive" left and the enablers in the main stream media, particularly the omnipresent Jewish element who seem incredibly conspicuous-Frum/Klein/Krugman etc etc etc who carry an historic burden (which I explain in the link) that seems to afflict their common sense, and the great Jewish tradition of reasoned argument, when confronted with the likes of Sarah Palin.

President Obama at his speech at the Tucson memorial service-which turned into a college students rock star rally totally out of sync (the audience participation, the campaign type shirts, not the speech) with the supposed reason for the event, made a call for a new, civil discourse in political life;

"LET US HAVE EMPATHY" he said.

Here are just a tiny sampling of how the left have taken up his clarion call and are dealing with Sarah Palin, for instance, in this new, glorious, time of sweetness and light from the leftist media.

It is all well an d good for President Obama to give a lofty call for a new dialogue, but those are just words. When he actually names people from the left who have dragged Palin through the mud, and continue to do so, then and only then, can a true national dialogue of reasoned interaction commence..Here is the liberal site Gawker 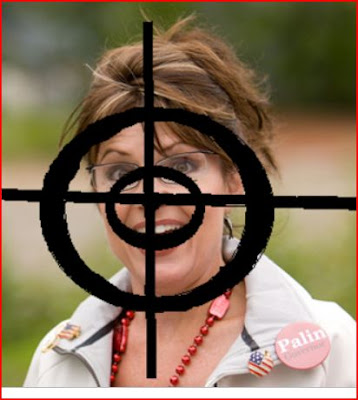 "
This is the liberal site "Gawker" response to the new "empathy"
Posted by M. Joseph Sheppard at 9:45:00 AM