It seems to me, and to many people I am sure who have felt the justified wrath of the redoubtable Robert Stacy McCain, that he is as hard boiled a journalist as could be found. That said, and I think it is a character trait of many of this breed, at the very core there is a solid, honest commitment to first principles. McCain states his opinions hard and clear-that much is certain but he goes for facts as a bedrock.


But deeper than that there is a sense of a decent human being who is driven by that inner core humanity to do and say what is right and damn the torpedoes. I believe this is, whether his readers recognize it on the surface or feel it as a gut instinct, why his blog is so massively popular. Below is a classic example of all the very best that is McCain.


He goes beyond whether he is a supporter of Palin,or not as the case may be and defends her and her family-because it is the right thing to do and does it in inimitable and frankly classy,style. 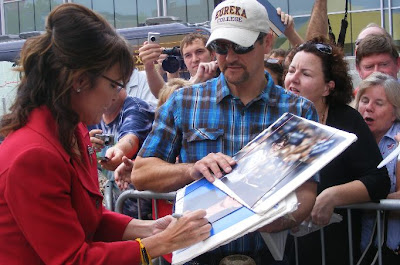 Todd Palin helps his wife sign autographs after her Sept. 5 rally
in Manchester, N.H. (Photo by Peter Ingemi.)
A source who doesn’t need to hide behind a cloak of anonymity:

“This is a man who has been relentlessly stalking my family to the point of moving in right next door to us to harass us and spy on us to satisfy his creepy obsession with my wife. His book is full of disgusting lies, innuendo, and smears. Even The New York Times called this book ‘dated, petty,’ and [said] that it ‘chases caustic, unsubstantiated gossip.’”
– Todd Palin

During my trip to Wasilla last year, I told Todd Palin that if he had shot Levi Johnston, no jury in the world would have convicted him, and his wife’s poll numbers would have gone up.
Our conversation was informal and off-the-record, so readers are left to imagine Todd’s reaction, but certainly the Palins can’t be held responsible for every crazy thing a journalist says. (It was, after all, merely a hypothetical.) And neither can the Palins be blamed for what I’m suggesting now.
Joe McGinniss deserves The Mother of All Ass-Whuppings, and Todd Palin ought to give him exactly what he deserves.
So I’m asking readers to go make a $25 donation to SarahPAC to help defray Todd’s legal expenses when he shows up at McGinniss’s first book signing and pounds that scurvy worm into a bloody pulp.
Please give $25 to SarahPAC, so that we can bail Todd Palin out on that assault charge — and then fly him to the next Joe McGinniss book signing to deliver yet another brutal ass-whupping.
Lather, rinse, repeat.
Just give $25 to SarahPAC, you see, and we’ll cover Todd Palin’s legal expenses and fly him to wherever Joe McGinniss appears in public, turning McGinniss’s book tour into a nationwide beatdown tour.
After McGinniss gets out of the hospital from his first ass-whupping, he’ll probably get a restraining order against Todd. Still, Random House will be forced to hire armed security to protect Creepy Joe because, hey, what’s a restraining order to an insulted husband who’s got thousands of loyal supporters donating $25 each to cover his legal expenses?
Bonus suggestion: Sarah PAC should hire a documentary crew to chronicle Todd Palin’s “One Nation Joe McGinniss Ass-Whupping Tour.”
Proceeds from sales of the DVD would go to defray Joe McGinniss’s medical bills. “Compassionate conservatism” and all that.
TODD PALIN FOR FIRST DUDE
Because Once His Wife Is President, He Can Start
Whupping Asses in the White House Press Corps

This website contains copyrighted material, the use of which may or may not have been specifically authorized by the copyright owner. Excerpts of such material is made available for educational purposes, and as such this constitutes 'fair use' of any such copyrighted material as provided for in section 107 of the US Copyright Act. In accordance with Title 17 U.S.C. Section 107, the material on this website is distributed without profit to those who have expressed a prior interest in receiving the included information for research and educational purposes. Original material published on this website may be excerpted and the excerpt reproduced for the purpose of critical reviews. However, such original material may not be reproduced in full on another website or in any manner without prior approval from this website's owner. In all cases when material from this website is reproduced in full or in part, the author and website must be credited by name and a hyperlink provided to this website.
Posted by M. Joseph Sheppard at 12:54:00 PM