FIRST VIDEO CLIP OF SUPPORTERS AT THIS LINK

Details are sketchy at the moment, but multiple souces confirm Governor Palin has arrived at the Machine Shed Restaurant in Des Moines:
Via Jennifer Jacobs of the Des Moines Register…

Sarah Palin is here at the Machine Shed in Urbandale, with a crowd chanting “Run, Sarah, run.” #iacaucus #palin

…and Jeff Zeleny of the New York Times:

Palin chief of staff Mike Glassner in the house here in Urbandale. Palin mobbed despite best efforts of staff to get people seated

Update II: Here are a few pictues from the Machine Shed floating around the twitterverse. Apologies for not citing who took them but I can’t figure it out.
Governor and Todd Palin at Machine Shed Restaurant: 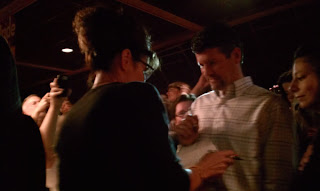 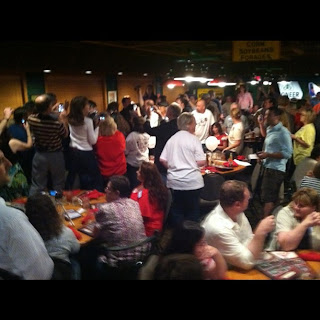 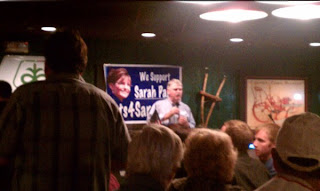 AP just picked up Sarah's C4P get together!http://www.google.com/hostedne...URBANDALE, Iowa (AP) — Sarah Palin is making a surprise appearance at a suburban Des Moines restaurant.And she was greeted there Friday night with chants of "Run, Sarah, run!"Hundreds of fans jammed into the Iowa Machine Shed, with the backroom of the farm-themed restaurant overflowing, as people from as far away as Texas, Florida and California strained for a glimpse of the former Alaska governor.Accompanied by her husband, Todd, she worked the room, shaking hands, posing for pictures and hugging babies.Palin, the GOP's 2008 vice presidential nominee, is considering a presidential run. She speaks to a tea party rally on Saturday in Iowa but is not expected to disclose a decision about her political future for another few weeks.
Posted by M. Joseph Sheppard at 6:34:00 PM