@ppppollsPublicPolicyPolling
"Obama trails Palin by 14 with independents in North Carolina, that's when you know you're having a bad month."

The media continues its "unelectable" campaign against Palin and the GOP establishment including those media personalities who have chosen their favorites e.g. Coulter who has swooned for Christie have switched into all out attack mode against her.


What goes unremarked upon was Palin's solid third place at 14% in the Washington Post /ABC poll-when she is not even a declared candidate and Perry  has received the star treatment.


Digging down further into where the statistics can't lie, because they are an aggregate of polls, the
Real Clear Politics aggregate of Palin versus Obama belies all the negativity directed against her as the unmistakable trendline below shows: 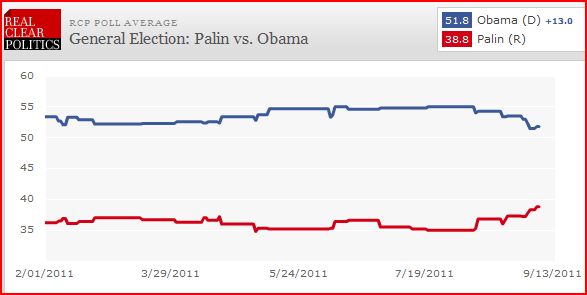